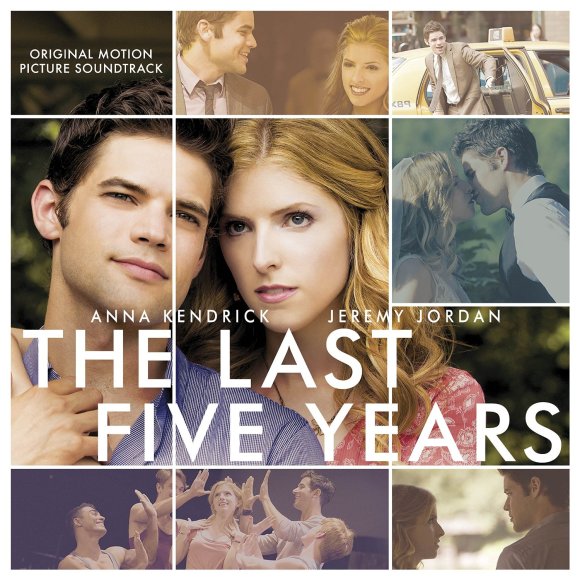 Happy New Year. After nine months of my new job, I finally have the mental bandwidth to blog again – and what better way to start 2016 than watching musicals on the sofa?

The unique structure has confused many, but in my opinion is one of the most effective elements of the show (once you get your head around it). It takes alternate songs from each of the protagonist’s perspectives – Cathy progresses from the end of the five years to the beginning, whilst Jamie’s songs are chronological. They cross over in the middle song (the only time when they are at the same point in their narratives), and much of the connection to the storyline comes from seeing the whirlwind beginning of their romance juxtaposed with it’s gruelling decline.

It won’t be everyone’s cup of tea, but I’d urge anyone who loves musicals but hates sickly-sweet romcoms to give it a shot. If you do connect with this sort of thing you’ll be be swept away by the excitement and energy of the courtship, and the sadness of its end. Fantastically performed, it shows off Jason Robert Brown’s complicated score at it’s best.

I, for one, will be making a new tradition of sitting down and watching it every New Year’s day (and maybe a couple of times in between). Happy 2016 peeps.

The Last Five Years has had a very special place in my heart for the past 10 years, since discovering it during a cabaret at university. Still Hurting was such a powerful story and appealed to my 20 year old self, two years into my latest stretch of singledom, feeling all the feels and thinking that the protagonists were pretty old (23-28, ha!).

I listened to the album constantly and every word seeped into my brain. When I started singing lessons in 2010, Nobody Needs to Know was the first song  that I sang. I got my sister addicted, and dragged her along to see a production in a tiny theatre in Turnham Green in 2011. Last year, I laid in her East Village apartment and watched the movie for the first time on her iPad, slightly anxious with anticipation.

Life has changed a lot in the last 10 years – I’ve overtaken Jamie & Cathy in age, I’ve found that love that they are after and my sister is now a real Shiksa Goddess living in New York. Those cabarets reminded me of my love of musical theatre, that singing lesson led me to my wonderful choir, and the trip to Turnham Green inspired a review that became this very blog. At this contemplative time of year somehow it all seems connected to this musical.

Just like a great novel, my understanding and sympathy for each character has ebbed and flowed with my life stage. Whilst I hope that 2016 brings many new things, it’s great to go back to the old ones from time to time. The last decade with L5Y have taught me so much. Here’s to the next one.

The Last Five Years is available to buy/rent now. I watched it on Amazon Prime.

Into the Woods: At Cinemas Nationwide from Friday 9th January

Funny, absorbing, beautiful and challenging. A masterclass in how to bring great musical theatre to film.

I am aware that I am biased. Potentially I didn’t see this film through an objective woman-of-the-people filmgoer’s lens. I love a good musical and Stephen Sondheim is the MASTER. The darkness that he has brought to musical theatre over his long career has been way ahead of his time, and this movie brings his 1987 show into the 21st century.

Not that the book needed much tweaking – the themes and challenges of the characters are universal and their presentation seems surprisingly modern, helped by the addition of some CGI to make the fairy tale setting that bit more believable.

For those who haven’t seen it on stage or been listening to the album for years, here’s the premise: It’s a mash up of fairy tales –Cinderella, Rapunzel, Jack & The Beanstalk and Little Red Riding Hood all begin their well-known quests and head into the woods. There they meet a baker and his wife attempting to break a curse laid on them by the wicked witch. Yet this is not your usual fairy story, for the key is in its complications, what happens after ‘happily ever after’…

I won’t tell you any more of the plot, but as someone who is generally a fantasy-sceptic I was amazed at how well the film dragged me into its web. The acting is great – Emily Blunt delivers a smasher as the Baker’s Wife, Anna Kendrick is on her normal barnstorming form and even James Corden is believable and effective as the hapless Baker. This isn’t even mentioning the goddess that is Meryl Streep, the appearance from Johnny Depp and, (my personal favourite song) the unforgettable performance of ‘Agony’ in all its’ camp glory by the two princes (Chris Pine & Billy Magnussen).

There is no dead wood here, no Russell Crowe. The only time where the spell seems to be slightly broken is during some of the spoken word pieces, but I can forgive these episodes as they serve a purpose in bringing the characters back to earth slightly. It takes nothing away from the story and slightly reflects the central message of the show – that we are all flawed in our own ways, and each have our own story to tell. Witches can be good, prince charming could well be a let-down and sometimes when wishes come true we wonder what all of the fuss was about. It’s a cautionary but ultimately optimistic tale.

To the many of you who have pre-booked tickets for this weekend, GET EXCITED. We have a modern classic on our hands.

Thank you very much to Laughing Buddha and Disney for the advance screening tickets – I could get used to this!